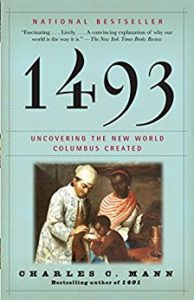 The sequel to Charles C. Mann’s best selling novel, 1491, describes how the Columbian Exchange shaped the world. The Columbian Exchange explains how plants and animals alike hitched rides on European boats to make new homes across the ocean, and Native crops made their way to Europe. Mann argues that the creation of this worldwide network of ecological and economic exchange paved the way for the rise of Europe, ravaged imperial China, disturbed Africa, and made Mexico City the center of the world for two centuries.